I have never understood those gun owners who dislike casting firearms civil rights in the light of other civil rights issues, say, abortion.

Sure it’s an inflammatory approach, but the time for gun owners to shut up and stay in the closet is long past.

Thankfully, Alan Gura (he’s the guy with hair to my right) has no problem pointing out 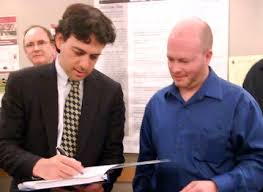 Read it and enjoy. 28jisaacson

So, leftist judges’ legal logic on a politically-favored topic, abortion rights, binds them like a tar baby into a similar result* for an unfavored topic, firearms civil rights.

Can you say “Unintended Consequences?” I knew you could!

*if they’re intellectually honest in their ruling, of course. We’ll see.