Posted on November 24, 2011 by Davidwhitewolf 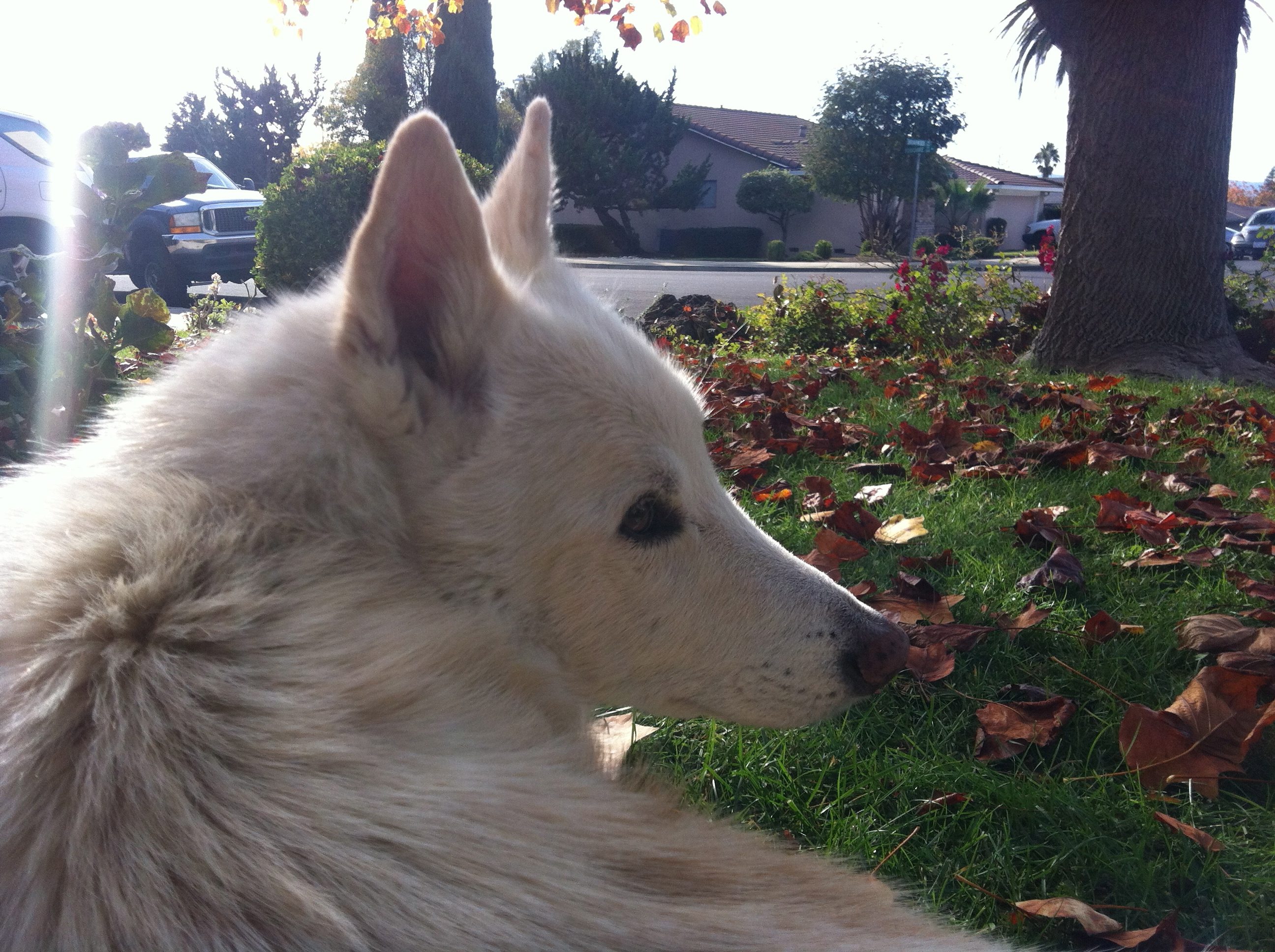 I found Alaska, our white wolf-white shepherd wolfdog, as a pound rescue in December 1999. He was six months old, and a few months earlier had been found abandoned on the side of the road, with a shattered elbow and hip.Â  The hospital staff came to love him so much during recovery that the doctor who’d saved him — pro bono — stationed a clandestine intern at the pound to prevent Alaska from being euthanized before they could sweep in and adopt him if no one else would. But it was doubtful he’d ever run without lots of careful rehab, so no one adopted him. I saw him in the local Davis newspaper, and very shortly took him home. 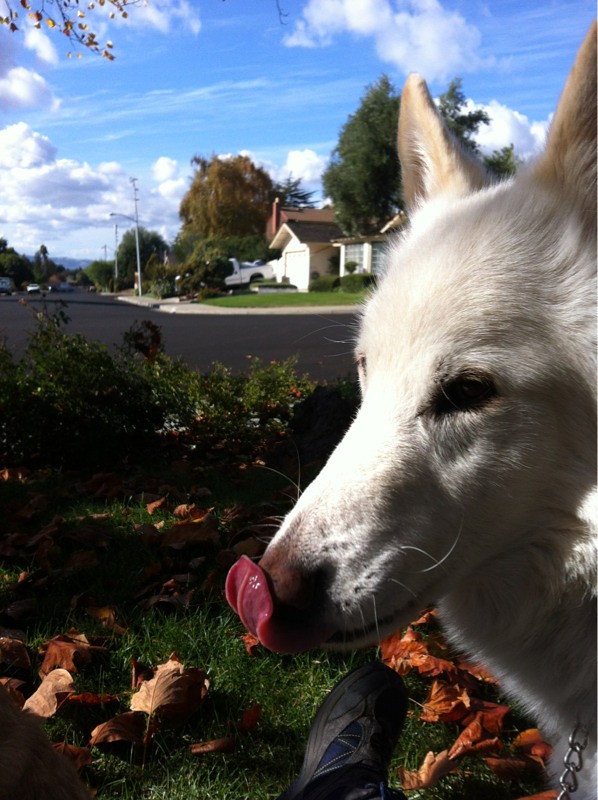 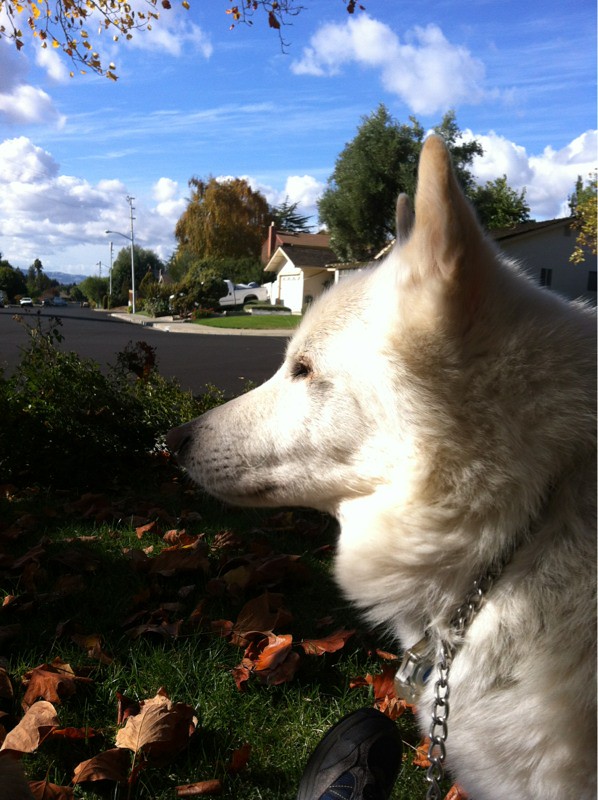 The vet hospital staff had called him Klondike, but my daughter decided to name him Alaska. In truth, he was my dog — we’d bonded at the pound, as this poor pup so desperate for companionship tried to bury his head in my abdomen with all his strength. This became his trademark hug, and he and I hugged often.

Because of his injuries, he was fated to always walk with a painful limp from his front left elbow. He bore this stoically, as wolves do. More difficult was that the ball joint of his rear hip had to be removed. Still, his joy in life was so great that with the doc’s instructions, and lots of love and attention, he was running smoothly within weeks of coming home with me. 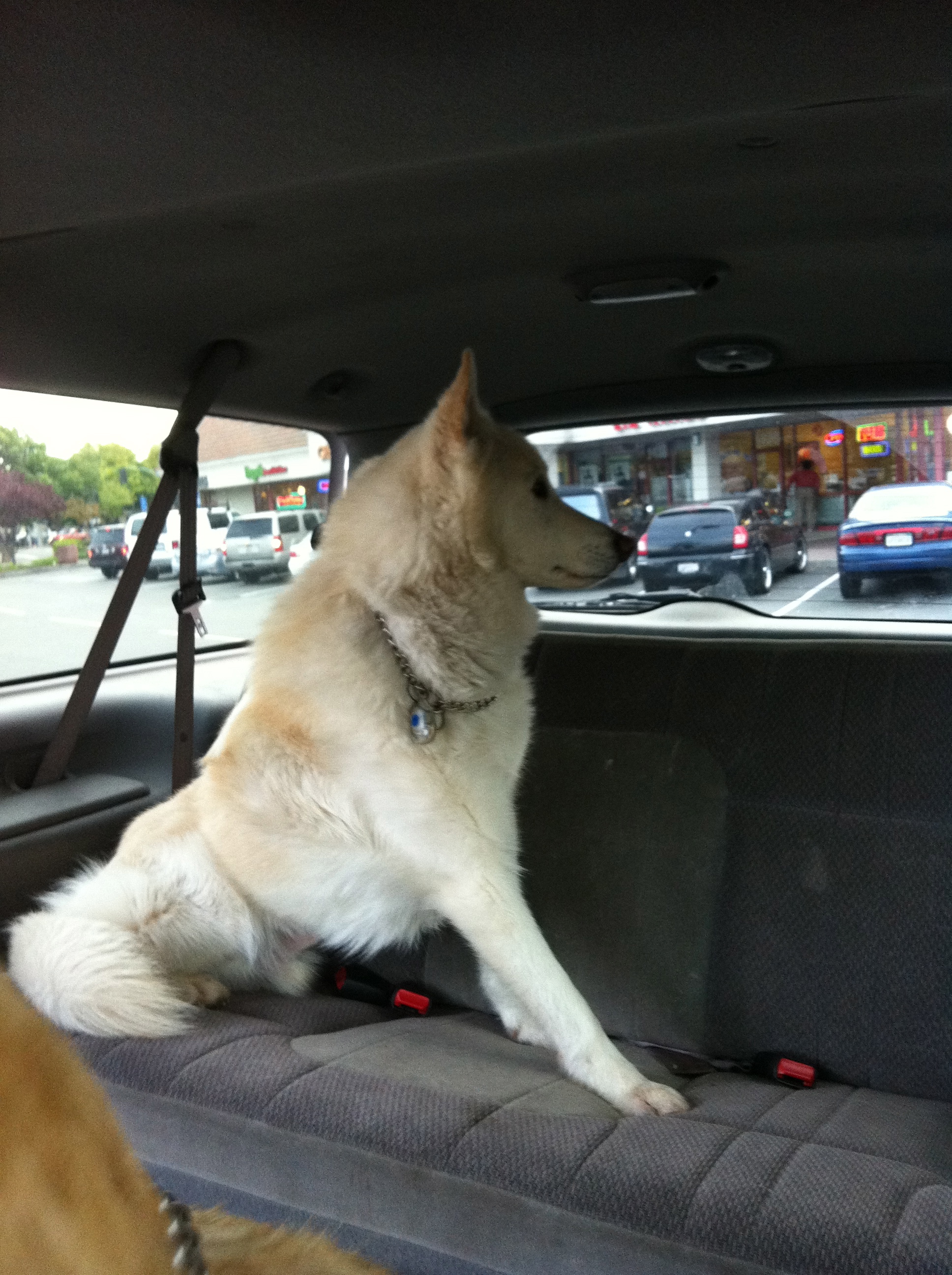 Seeing this beautiful animal loping at my side as we ran through suburban streets and parks, explored fields and hiked trails never ceased to be one of the great thrills of my life.

We’d had dogs in my family as I was growing up, but Alaska was my first dog, which meant all the more to a young man who’d grown up a voracious reader of Jim Kjelgaard novels. 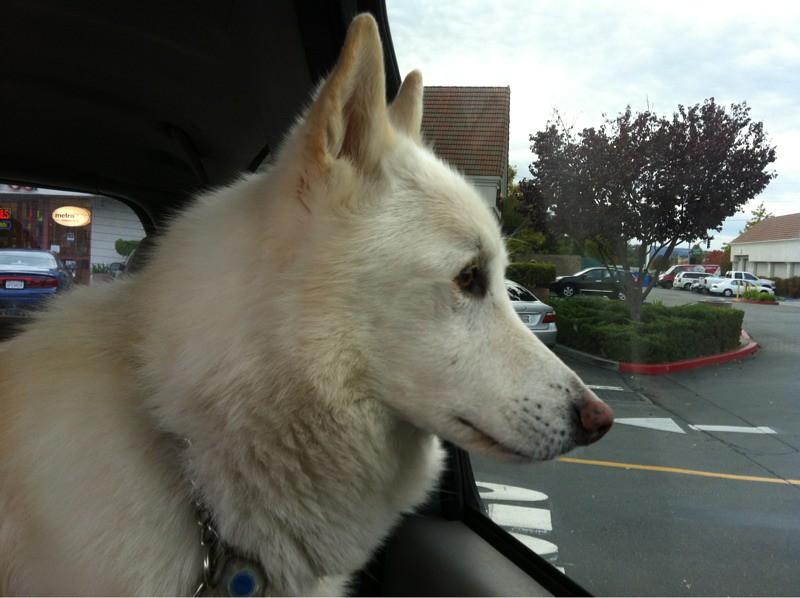 Kjelgaard took care not to humanize his animal characters, but his tales vividly illustrate the adage that any creature with a personality is, by definition, a person. Alaska was not a human person, but still, he was one of the sweetest, gentlest, most inquisitive and agile-minded people I’ve known.

We hadn’t learned he was part wolf until after adopting him, but wolf he was, and that brought complications. Winter wolf syndrome manifested not as a dominance issue, but rather that he panicked if left alone during those times, so some six months after he entered our lives, we got Kaya, another pound rescue and shepherd mix who became his constant companion. Though unrelated by blood, they became brother and sister in all the ways that counted. 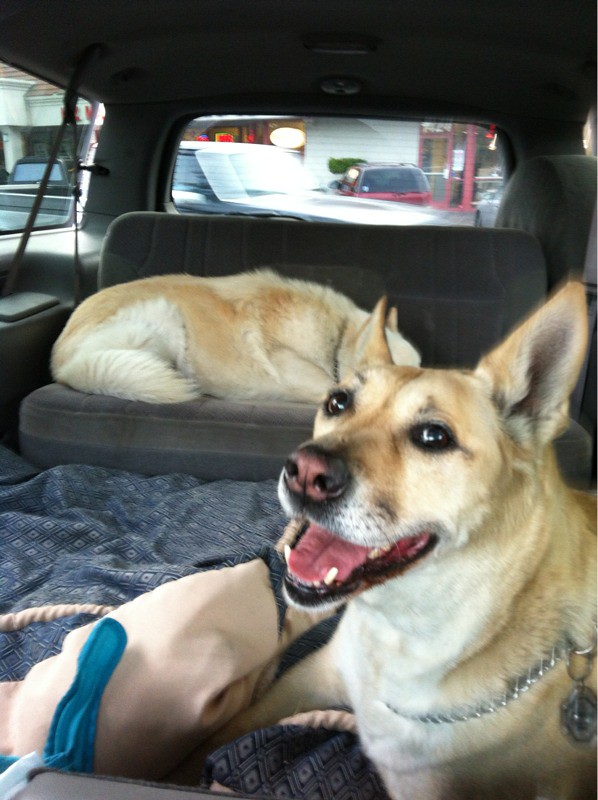 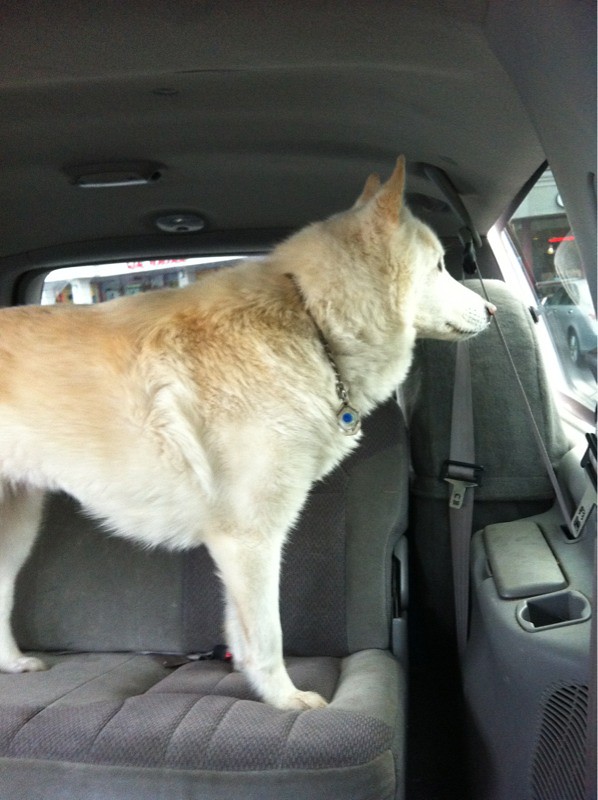 Three weeks ago, Alaska started peeing blood. Tests and X-rays showed lungs, heart, and bloodwork were fine, and antibiotics cleared up the problem, we thought — but after the ten-day course, the blood returned. Yes, he had an infected bladder, but this time an ultrasound showed what the x-rays could not — a massive, cancerous growth of blood sacs and vessels around his right kidney. Further tests showed it had not metastasized and was operable — and I desperately wanted to operate — but post-op chemotherapy and other complications ensured the expected three or more months of life he’d gain from surgery would never be pain-free, and likely more uncomfortable than ever before. 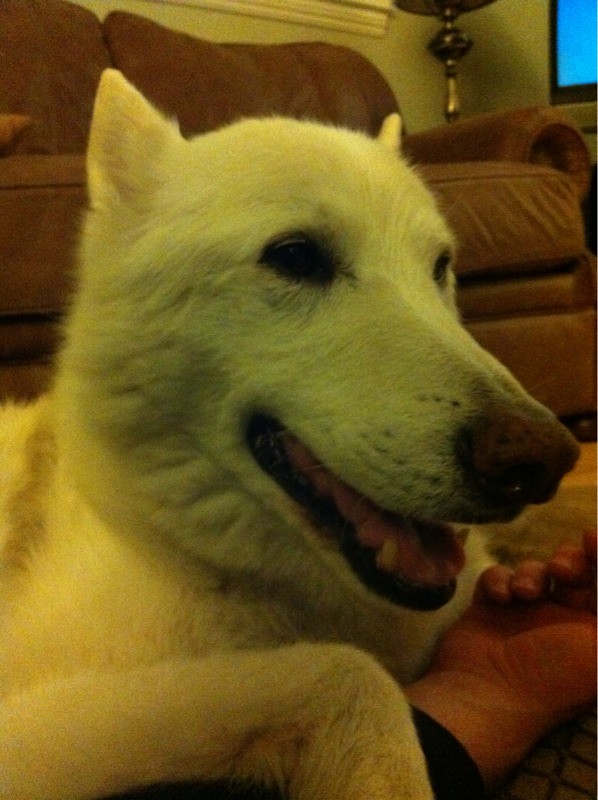 Alaska had borne so much pain with such fearless joy in life for so long, we could not subject him to even higher pain loads in exchange for a few months of stoic agony.

But not operating was worse. He had no real symptoms other than blood in the urine, but the danger with this type of cancer is that the dog may not feel sick, but a rupture can happen at any moment, and he’ll bleed out in confusion and pain.

The ultrasound was a week ago today. The vets gave us a few days at the most before a humane conscience required either surgery or the alternative, and we determined to make those days the best in his life if we could. I think we did. In those five days, he chased ground squirrels for two hours straight; visited a favorite dog park where he could run leash-free; flushed four jackrabbits twice in the same field; vigorously defended our home against the evil mail person, those noisy teens on their Razr scooters, and assorted wild critters with full-throated battle roars; happily returned to old haunts and explored new ones; and did a lot of napping by my side on our sunny front lawn, where the wind funnels scents from all over our neighborhood to be lazily sniffed. Meals were his delicacies: steak, eggs, bacon, nachos, lasagna, spaghetti with meat sauce, cookies, biscuits, and cinnamon treats. 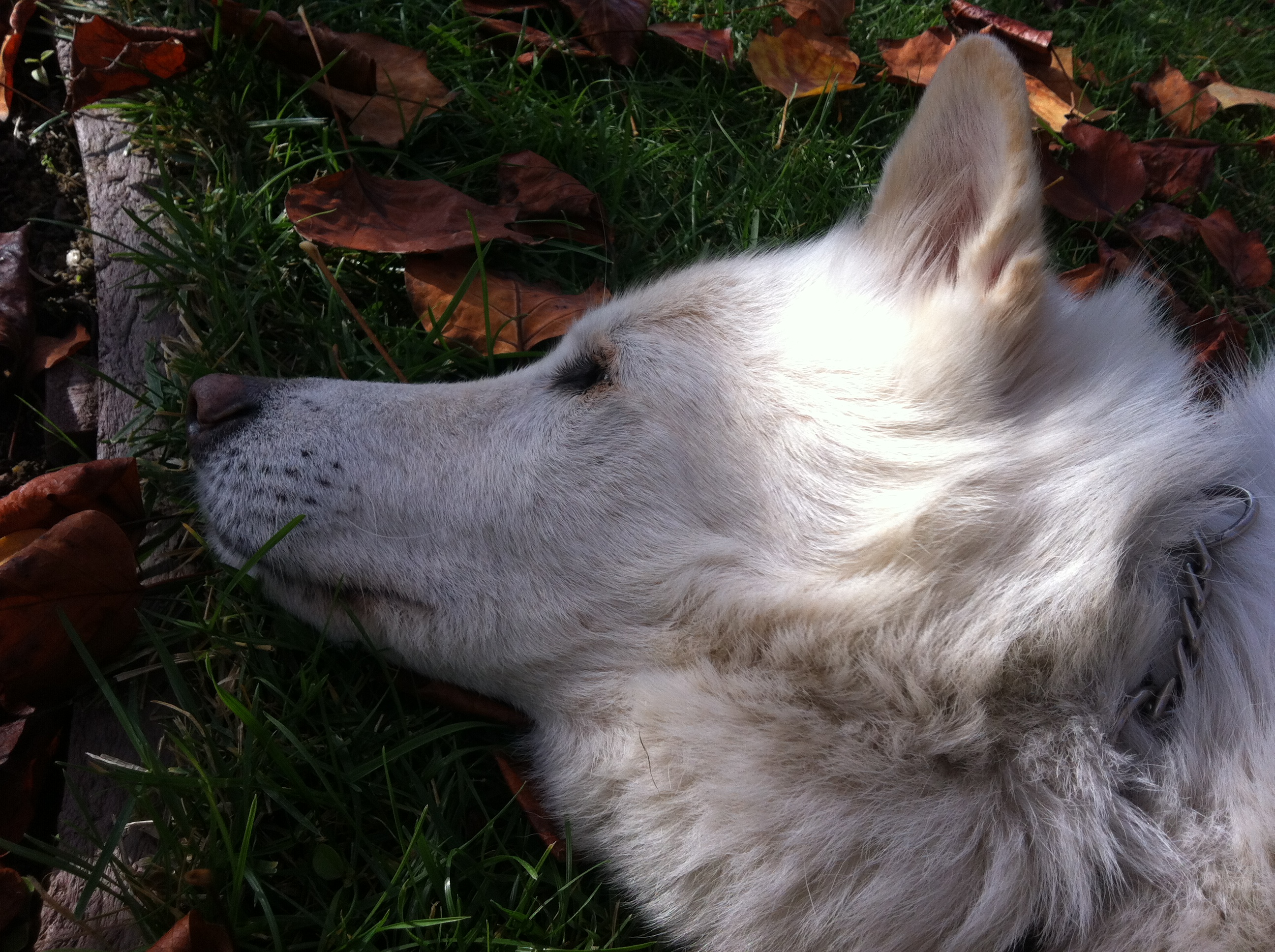 And I never left his side. His greatest joy was always when his pack leader returned home to him, his greatest sorrow each time I left. From the moment of the diagnosis, I was not about to leave. In these last nights and days, he fell asleep to my hands massaging his arthritic joints many times; we spent hours curled together, his paw smashing my nose as we put tension on his poor wrecked elbow, a move he’d taught me long ago that eased the pain from compression and generated ecstatic rumbles. 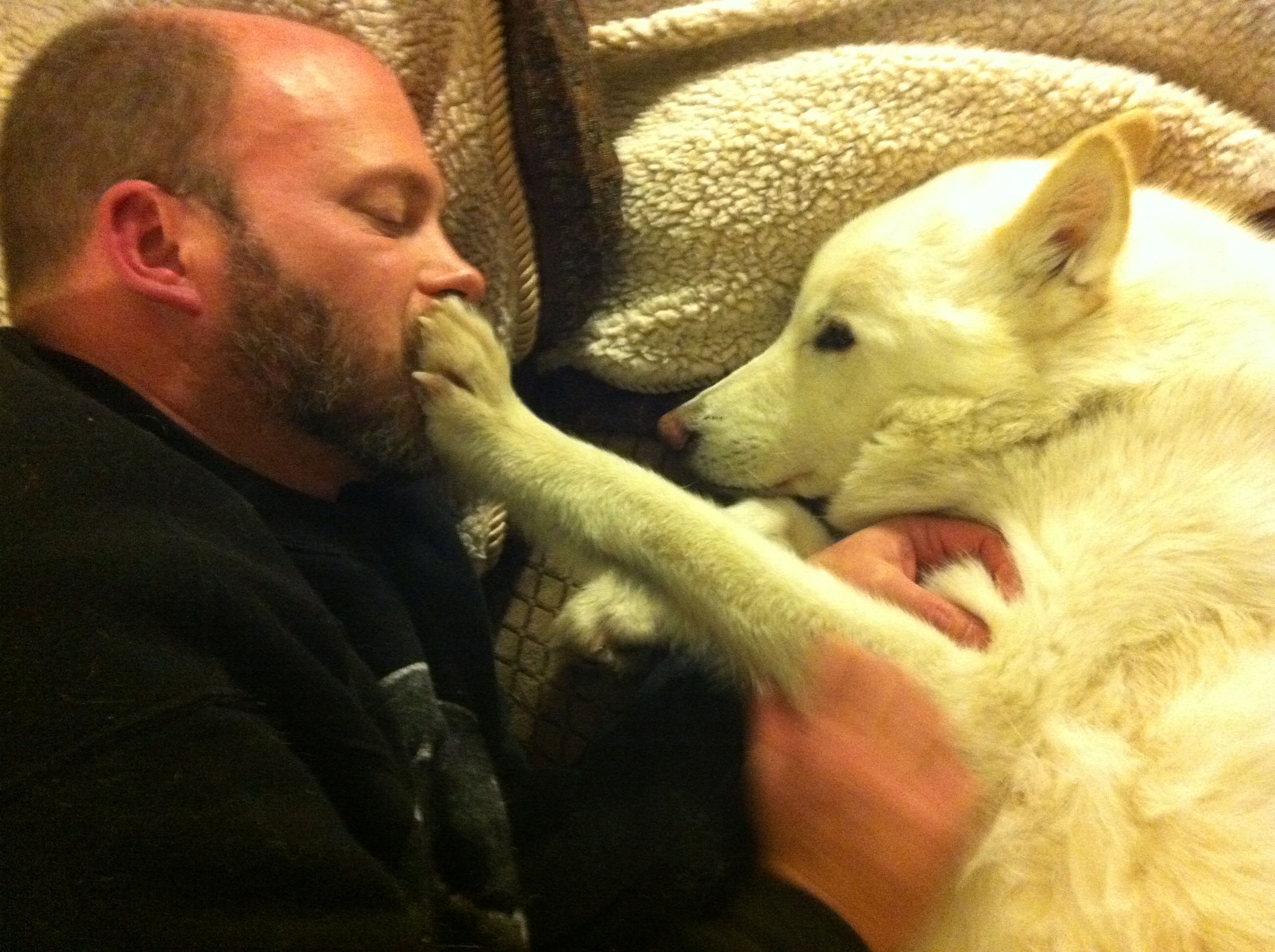 As John Ross said of his dog, I didn’t want Alaska “to die under fluorescent lights on a cold stainless steel table in a room stinking of antiseptics.” Tuesday evening, our wonderful vet came to our home, for which we cannot thank her enough.

And Alaska knew. Deliberately, he made a last patrol. Very deliberately, he approached first me and then my wife to give his trademark hug. When the happy juice hit, he blissfully melted onto his beds. He never noticed the rhinoceros tranquilizer that sent him to dreamland, much less the final injection. It was the most peaceful, beautiful way to go — by the fire, on his favorite beds, with his head in my hands. 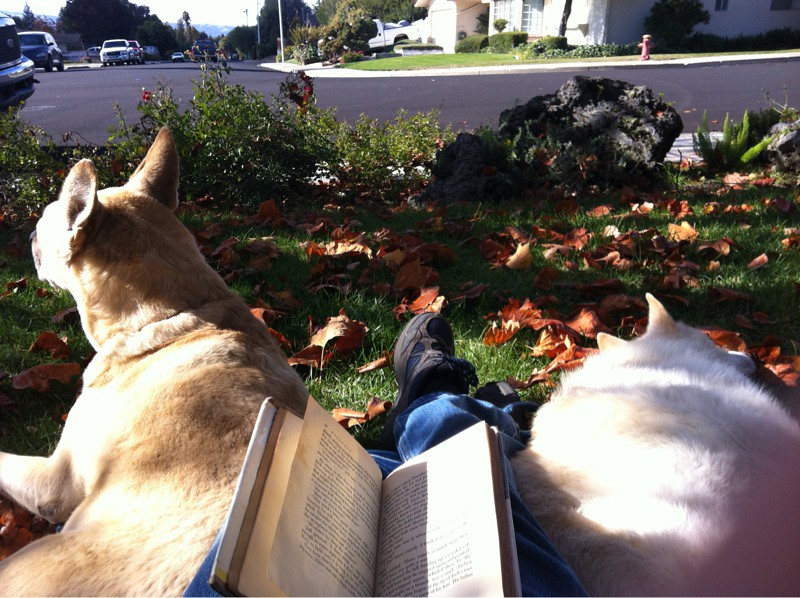 All photos taken during the last few days of Alaska’s life.

This entry was posted in Heroes, Comrades and Brothers. Bookmark the permalink.