It’s actually made of iron.

Library officials have told Nashville’s chapter of the Black Lives Matter movement that meetings restricting those who attend by race aren’t allowed on public property.

The decision has outraged Black Lives Matter members. But Nashville Public Library officials said theyâ€™re following a library policy that specifies all meetings at their facilities must be open to the public and news media.

â€œThe library didnâ€™t cancel anyoneâ€™s meeting,â€ said library spokeswoman Emily Waltenbaugh, referring to a Black Lives Matter meeting Saturday that has been moved to a church. â€œWeâ€™re taxpayer funded. We have to be open to anyone any time.â€

Of course, since irony is to SJW’s as sunlight is to vampires, they had to blame something. 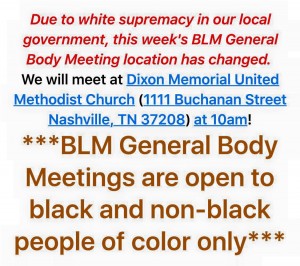 Don’t think about that for too long. It’s meant to only be understood by other SJW’s and will shut down your synapses.

This entry was posted in The Left is Never Right, Too Stupid to Live. Bookmark the permalink.

3 Responses to Irony so thick