CDR Salamander has spotted something curious

As others have observed, there is a good chance that real civil unrest against the invasion of military aged men from Syria will break out in the open in Germany first.

With the toxic cocktail that the Merkel led government has created, not a bad bet.

In any event, what I thought was just a bad color exposure on the Norwegian flag for some reason flying in German marches early on in the year, in this article from the DailyMailUK ostensibly about France’s Le Pen, they cover a bit about the latest marches in Dresden from the growing German protest party PEGIDA (Patriotic Europeans Against the Islamisation of the Occident), in German (Patriotische EuropÃ¤er gegen die Islamisierung des Abendlandes).

Nordic cross in German colors … wait … I know that flag … and then it hit me.

That is the flag of two of my heroes; Pastor Dietrich Bonhoeffer and Colonel Claus Philipp Maria Schenk Graf von Stauffenberg.

That is the Josef Wirmer flag. The flag of the German resistance in 1944.

He is speaking of this 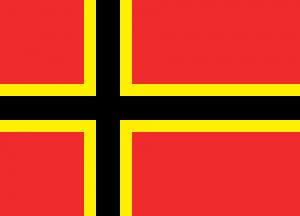 Click on over and read the rest. Especially the closing line.

1 Response to An Interesting development