The King of the Weiners

Last weekend, The Wife appraoched me with a picture of three Dachshunds asking how cute I thought they were. I said they’d look a lot cuter if we didn’t already have four dogs. She scrunched her face up and said they’d be visiting us.

I balked, but she went to shush me and laid out the scenario: A dog hoarder in Aberdeen, WA was busted for having waaaay too many dogs (more than a dozen). Mostly Doxxie’s and Doxxie mixes. Even though Dachshunds are generally easy to adopt out, the local rescue was overwhelmed, but they had a woman with a rescue in Spokane who could help out, but the two towns are damn near as far apart as two towns can be and still be within the boundaries of the state.

They had someone who could get them to Tacoma, and the Spokane rescue could meet somewhere in the middle to take them the rest of the way. So she volunteered to make the hand off yesterday after work and then take today off work and run the middle section of the relay.

So I’d like to introduce Loras, Tommen, and Benjen. 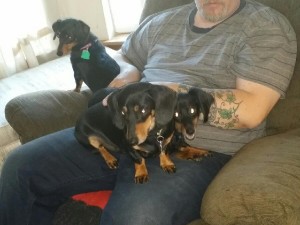 They stayed with us last night and will be heading east this morning.

Sometimes it only takes some time and gas money to help make a dog’s life better.

1 Response to The King of the Weiners