It’s been a while since I have posted an update on the happenings at work and in the Fab Shop. So why not today?

At work, I’ve put the finishing touches on a number of Flying Buttresses. This was one of “the small ones.” 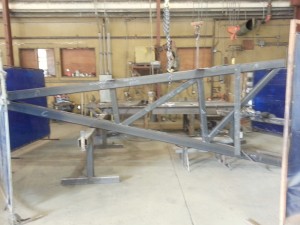 The fitters love me so much, they leave me big “gifts” in the assembly. The 1/4in gaps weren’t much of a problem. Not even the 3/8 gaps caused me to pause. But the angle gap there in the middle I could stick my thumb in. 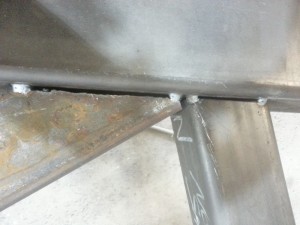 We also welded up some column caps/buckets. The box is 16″x12″x4″ and was to be completely welded, inside and out, as well as the top brackets, all the way around where they connect to the top of the box. 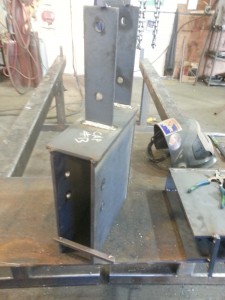 Once you get the five welds inside done, and two on either of the outside welds, according to our infrared thermal scanner, you can fry an egg on it.

I am actually passing this box design onto the instructors at the school as a weld sequence test. Just put the tacked together box on the front desk and ask the students to list which welds they’d do first, second, etc.. Every one of the guys in Fab Shop I showed the picture and described the weld req’s to failed. I likely would have too had I not walked into the project after five were already done.

Btw, there were 60 some-odd of these we did over two days.

I made one of these for my sister 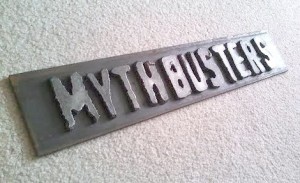 And I’m making this for the guy who does my tattoo work. 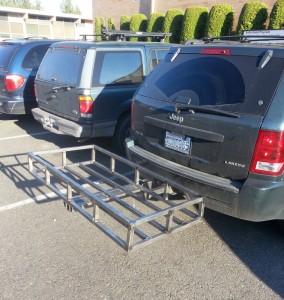 He wanted to be able to carry 500-800lbs off the back of his Jeep Wrangler. He’ll be able to tow another Wrangler with this, if the need arises.

Oh, and it does this too 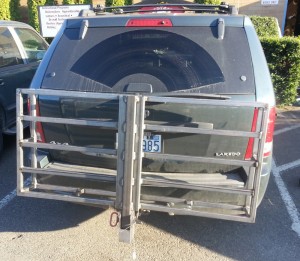 It’s currently about half painted. The muggy heat means hours of wait time while the paint dries.

Lastly, there was a regional Welding Rodeo in Western Washington a couple weeks back. Two teams of students from the school signed up, as did our Fabrication instructor and a couple of other teachers who work at the school.

For the Fabrication competition, you needed to incorporate “Fire and Ice” in your project. So the instructor team made a hoop and drilled a large number of holes on the top side of it with the idea of hooking it up to a propane cylinder. 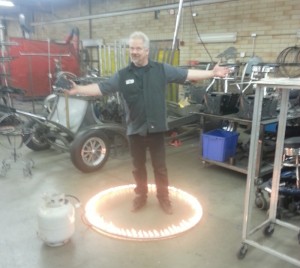 Much disappointment was had. Stupid government mandated internal valve regulators.

I suggested trying the MAPP gas cylinder. And after some fiddling about with fittings, much happiness arrived. 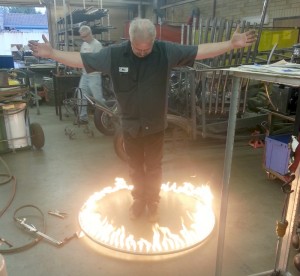 That is with the valve only about opened to the 25% level and without adding oxygen. Which is good, because our Joan of Arc there was whining after about 10 seconds of stepping into the circle.

I’ll post some pics of the hitch carrier when the paint is done and see what other projects I walk into.

4 Responses to Goings On